Do Jobs Care About Tattoos?

By Own Your Own Future

According to parents, teachers, and various HR managers, two things are important when being chosen for a job – GPA, and history of tattoos. However, there are a plethora of newly-opened positions that don’t require the maximal GPA or top-end university degree. Additionally, more companies and organizations are becoming more inclusive of people who ink their bodies, both in more and less prominent places.

Nevertheless, just because more companies are becoming inclusive, it doesn’t mean that all of them are. A big decision factor for people who want to get a tattoo is whether they will face difficulties when searching for a job. In this article, we decided to crack down on the mystery and answer the question do jobs care about tattoos.

The dress code that restricts tattoos is nothing new. People who have tattoos are often looked frowned upon. One of the biggest restrictions for inked people at some healthcare institutions is that they are not allowed to donate blood due to certain regulations and potential risks for the receiver.

Although tattoos are getting more and more accepted, a lot of employers are encouraging their employees to keep their tattoos hidden and not visible, as it could be insulting towards the morale and the cultural policy within the company.  However, as long as the tattoo is invisible it won’t harm anyone, as no one else will see it and get potentially disturbed or offended by that person’s belief.

Healthcare – Although healthcare is being more accepting of visible tattoos, the main concern spans over the fact that healthcare workers are in direct contact with patients. They’re, however, more accepting with smaller tattoos, that aren’t on arms or face. This, however, doesn’t apply everywhere. Some healthcare institutions will overlook a nurse with sleeved tattoos, while someone else with a smaller and less visible tattoo may still face problems when trying to find a job.

Law enforcement – In the past, tattoos were often associated with criminals because of the Yakuza and other criminal organizations around the world. Additionally, a lot of people still see tattoos as intimidating, so it wouldn’t give a good example if a conductor of law enforcement would be inked. However, small and less visible tattoos are being accepted, with more law enforcement levels sporting sleeve tattoos and other visible patterns. Nevertheless, even if they don’t face problems during employment, police officers with visible tattoos are asked to cover them while on duty.

The Justice System – Presenters of the law firms are supposed to emit law and order. That’s why having visible tattoos could appear potentially intimidating and offensive to some people. That said, avoiding the tattoo culture makes people in the legal profession look more professional and dedicated to the work. Still, this doesn’t surprise us, the entire appearance culture and dress code in this field can be quite strict, so many employers avoid hiring people with visible tattoos. They can also opt to ask their employees to hide them.

Administrative work – Administrative workers usually aren’t too restricted in having tattoos. However, some facilities and companies with a strict dress code may ask you to hide your tattoo if it sticks out too much. The same goes with the unnatural hair colors, facial piercings, and other body decorations that can be considered unethical for some job positions.

Military – This one is highly contradicting because, even though the military is quite strict about the tattooing culture, there are also a lot of military personnel members who are tattooed, some of them are heavily tattooed in fact. According to some surveys, the military also has some of the most heavy-tattooed members in the United States.

Generally speaking, tattoos are acceptable at most places, even in the job positions that are mentioned above. Nevertheless, it’s super-important for them to remain well-hidden so that they wouldn’t affect or compromise the work ethics at that certain job position.

According to the research that had 327 employers in the United States interviewed, about 14% said that they wouldn’t hire the tatted person at their job positions. However, 23% said that tattoos are likely not to affect their decision of hiring that person. The rest of the answers depended on various factors such as where the tattoos are positioned and what kind of role would be filled in.

Keep in mind that a lot of these statements have changed given that the research was conducted in 2014 when a lot of companies still didn’t have a clear picture about tattoos, and the tattoos weren’t so openly practiced as they’re now, in 2022.

What Tattooed Individuals Need To Know When Looking For A Job

Given that the decision of getting hired depends on so many factors, one of which is a tattoo, we decided to write a certain section that talks about what tattooed individuals need to keep in mind when looking for a job.

Tattoos Are Okay As Long As They’re Not Too Prominent

Some more formal job positions will require you to hide your tattoo with a piece of clothing or jewelry when coming to work. Usually, smaller tattoos are okay, and no one will bother you about them. However, if you’re working in some formal office or a high-grade corporation, your employees may not be pleased with arm sleeves and back tattoos that are revealed.

Facial tattoos can indeed be hidden with makeup, but applying tones of makeup is not worth it in the long run and gets expensive eventually. More formal job positions at the office, and public relations aren’t too friendly with the face tattoos, as that may affect how your colleagues perceive you and the work ethics at the company.

The stigma with the face tattoos is lifting, but they may still be considered unprofessional at some facilities. They could also be distracting.

It Also Depends On The Country

The truth is that nearly half of the United States adults are inked, which is why the stigma regarding tattoos at work is getting lifted. However, the same doesn’t apply to every country. Perhaps, the religion that is powerful in certain countries prohibits tattoos, and the employers aren’t accepting of them too for that matter.

Additionally, your tattoo may offend citizens of a certain country or be against what they believe to be right, which is also one of the things that can affect your odds of getting a job. 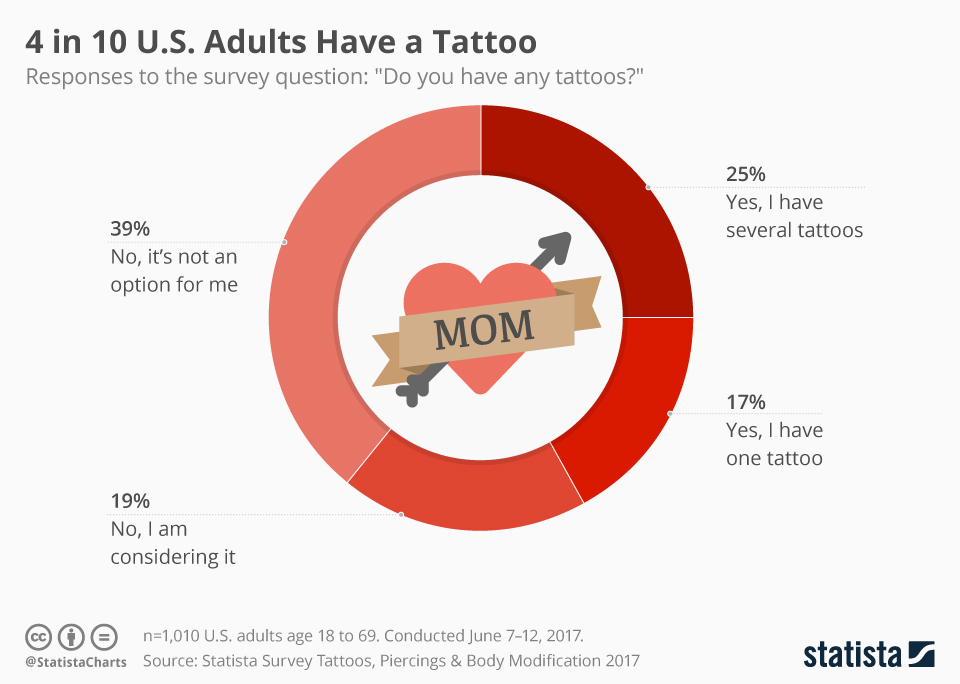 You will find more infographics at Statista

Offensive And Racist Tattoos Are Not Okay

People will ink anything and everything on their body, and oftentimes, they may not be aware of the message that their symbol entails. That’s why employers may look down on people who will tattoo some offensive and racist statements or symbols that may be offensive to some certain ethnic or racial group.

One example of an offensive tattoo at workspace would be some extremist or nationalistic symbol such as the Nazi cross, especially if your employer is a Jew for example, or has family members who have suffered through the Holocaust.

In that sense, it’s important to avoid tattooing potentially offensive signs, as you may not fit with the policy and ethics that the company you want to work in is trying to manifest.

Keep in mind that getting a tattoo is an important step in your life. Tattoo removals are not so affordable for everyone to get them whenever one regrets the decision to get a tattoo. The average laser tattoo removal cost would be between $7000 and $15,000.  Unfortunately, tattoos are there to last, and you should be aware that they could affect your potential employer’s decision not to hire you.

That’s why for a lot of tattooed people, freelance gigs are more attractive, as they don’t have to show their face or body, and are likely never to meet their clients in person. Still, having a tattoo doesn’t mean that your career life is over, there are a lot of job positions that are open to tattooed individuals. The stigma is also lifting so a lot of employers and known names are voicing the way they embrace tattooed job seekers.

Finally, we decided to list the companies that are open and accepting of tattooing, and won’t make a problem if you are looking for a job and are inked. In the coming years, we’re sure that this list will be even longer:

You can check for more from inkedmag.

Keep in mind that these companies won’t accept people with extremist or offensive tattoos that are visible, but won’t have anything against the particular and regular tattoos.