By Own Your Own Future

It’s no secret that computer science career options skyrocketed over the past years, especially with ever-emerging trends. It has become one of the most sought-after careers thanks to the rapid development of technologies. As the years pass, there are too many different careers and positions than one can count. That’s why we made a comprehensive list of the highest paying computer science jobs. Read on! 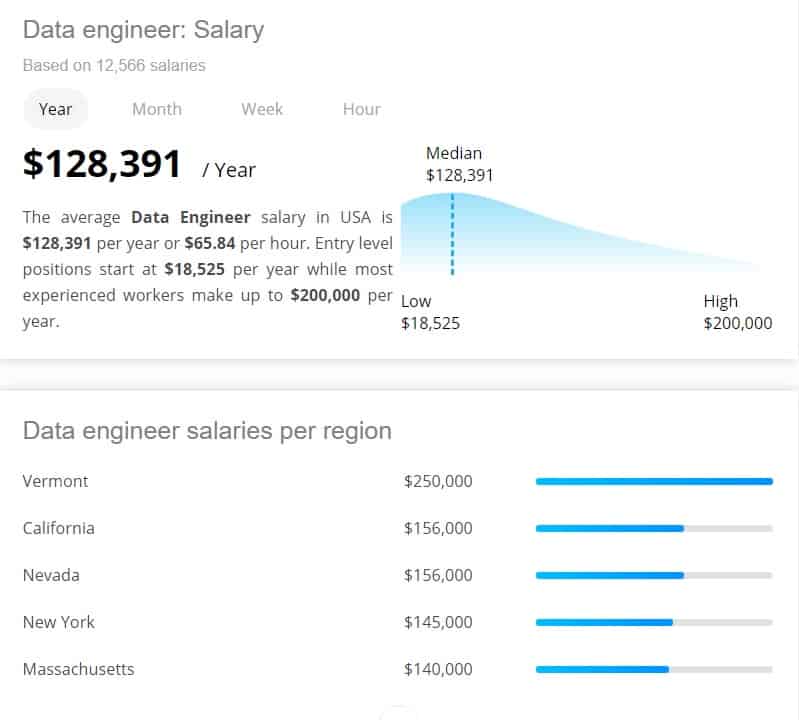 With social media and various websites generating a tremendous amount of data, there is a need to centralize it and operate with it efficiently. It’s one of the highest paying computer science jobs with around $128k median salary. But what does a Data Engineer do? They help companies and organizations turn tremendous amounts of chaotic data into insightful and value-driven information and knowledge.

However, the salary is not for nothing. Data engineers have to overcome various challenges, and working with chaotic data is nowhere near easy. You must learn about data warehouses, big data concepts, OLAP, Big Data, Business Intelligence, Hadoop, SPARK and more. You must utilize finalized machine learning solutions like Mahout, SparkML, and H2O while localizing data in queries using Pig and Impala.

Finally, you must get to know some important database management tools like MariaDB and Oracle before immersing in more complex database solutions like NoSQL, MongoDB, and others.

Data engineering is just one of the prerequisites in performing data science activities. Data Scientist is a job position often called the sexiest career option of the 21st century, for a good reason. Data scientists can apply tremendous amounts of data and classify them in science and other fields. Big data focuses on making a difficult decision within a business or a corporation. On the other hand, data science focuses on mathematical and statistical methodologies applied to data to help it make more sense.

In addition to that, data scientists consistently work on developing new machine learning and artificial intelligence solutions that help researchers make more sense of inconclusive data they deal with on a daily basis. The data science careers emerge on a constant basis, but they come with various requirements.

A good data scientist is well-versed with data analytics, mathematics and probability, and statistics. They use the knowledge and combine it with software engineering and development to develop machine learning algorithms and AI systems. They use languages like Python, R, Scala, and MatLab as well as their frameworks to make programs.

Data scientists have a keen eye to details and they work with various patterns they can easily spot despite the size of a dataset. Have good critical thinking and decision making skills. 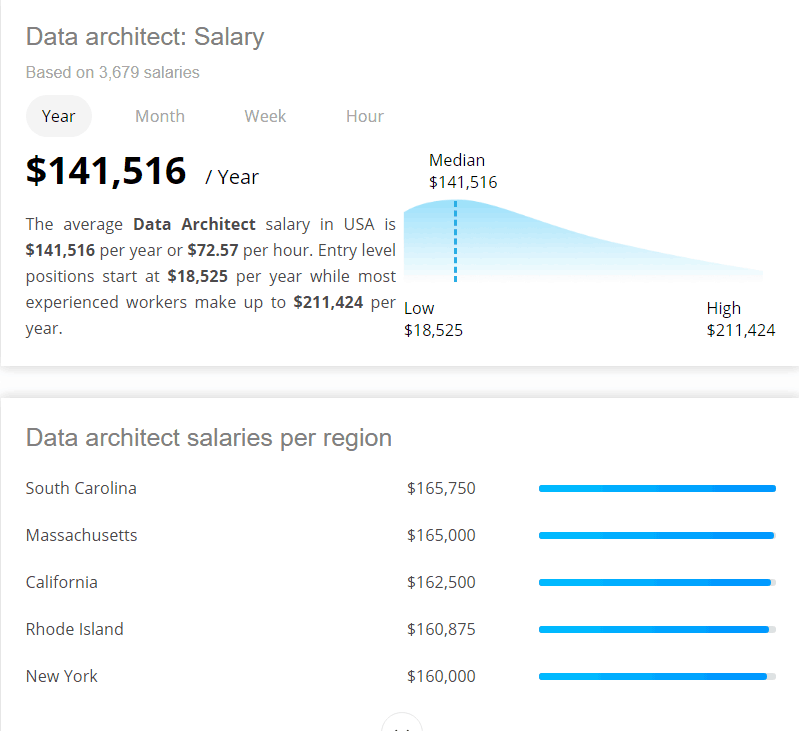 Data has become the oil of the virtual world, and everyone fights over it. It has immense value to the point it’s considered a goods exchange. It helps companies grow, it helps deliver conclusions over various scientific fields and has various applications in law enforcement, medicine, astronomy, and business.

But how is data constructed and placed in a decent infrastructure? That’s where the data architect comes to the play. They help organize data that was previously chaotic and scattered. Data architects are in charge of cluttering data in databases, organizing and maintaining them while constantly coming up with new solutions that can enhance their integrity.

In addition to that, the data architect ensures that data is properly referenced and that all three normal forms are satisfied. Lastly, the data architect takes care of the security aspect of data within a company and shields it from breaches. It’s a job that requires a lot of skills and dedication, but also a strong psyche and a certain level of responsibility.

A data architect is a well-paid position that requires the use of applied and practical probability, as well as different software methodologies and modeling algorithms. They need to be detail-oriented and easily spot patterns inside the databases they manage. They should be knowledgeable with common database systems as well as those complex ones and have great communication skills as they should translate the meaning behind data to their employers.

Data Security Analyst is a person who knows all the secrets behind computer security. While previous positions focus on organizing data, security analyst focuses on recognizing and handling corrupted data. Corrupted data, not only has the potential to lead to data breaches and other flaws, but it can also ruin a business by feeding wrong knowledge to machine learning algorithms handled by data scientists.

That’s why many large companies have a necessity to spend a lot of money on a knowledgeable individual who will protect their data. They are in charge of filtering data and shielding it through different development options. They have critical thinking skills and know data modeling approaches – both conventional and unconventional.

They watch over the network and security changes and control different departments over a company. Finally, they build firewall solutions that help businesses protect from malicious attacks. They can also troubleshoot various problems within the corporation and communicate with employers and customers on ways to improve the overall security of data within an organization. 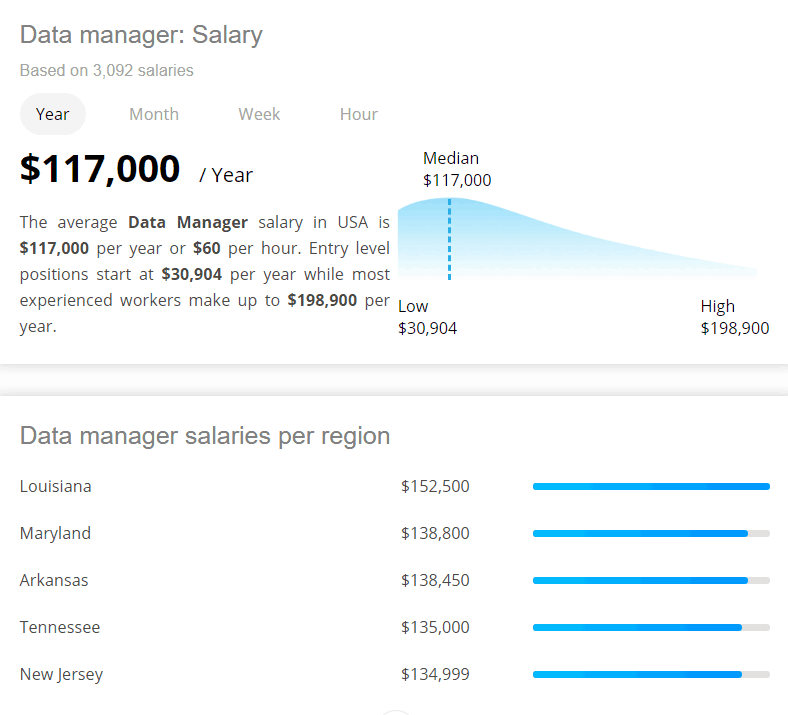 The data manager is in charge of managing data, as its name suggests. But, what does that entail? As mentioned in the previous positions, data is often scattered and hard to make sense of. Businesses usually can’t understand what it means. With data growing, it’s only natural that this job position will also continue growing. The data manager controls the business databases and how data gets distributed across them.

The data manager takes care of both smaller and larger databases. However, for larger databases, they need to be able to find various hidden patterns to explain. They should be well-versed with different database management systems and schemas currently active on the market. They need to ensure that the data is well-organized, has integrity and is secure.

They develop and design business databases focused on business growth. They also need to be knowledgeable with statistical analysis and have great communication skills to help translate the meaning behind scattered data to the authority. They help people in charge of data entry and research within databases and perform tasks like quality assurance and research studies. 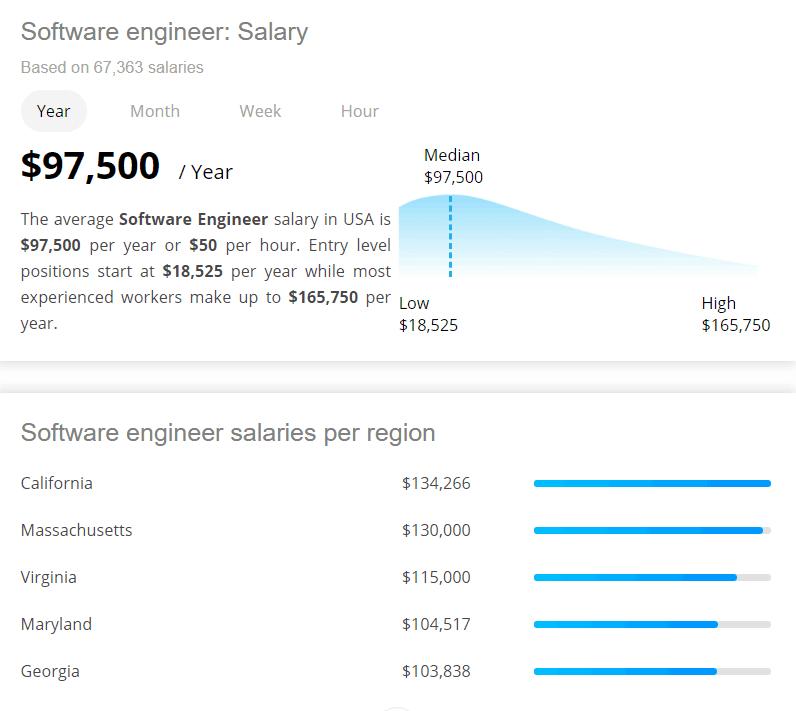 A software engineer is a developer with a bachelor’s degree in computer science or computer engineering. It is one of the highest paying computer science jobs because it focuses on developing a piece of software from the bottom up, with all of the requirements, analysis, features, and functionalities and other aspects. They possess great skills in software planning and projection. They are well-versed with various software development techniques and methodologies as well as popular design patterns.

They either work as freelancers or at the near top of great business corporations and are in charge of utilizing the necessary assets and programming skills to build a functional software that will appeal to a great number of users.

Besides technical knowledge like coding, database administration, knowledge about network and protocols, software engineers should be capable of working in a team of different sizes and combine their skills and knowledge together to develop software. They need communication skills which are extremely important.

Lastly, a software engineer should know the code they wrote, which requires proficiency from debugging and software testing before it’s deployed. 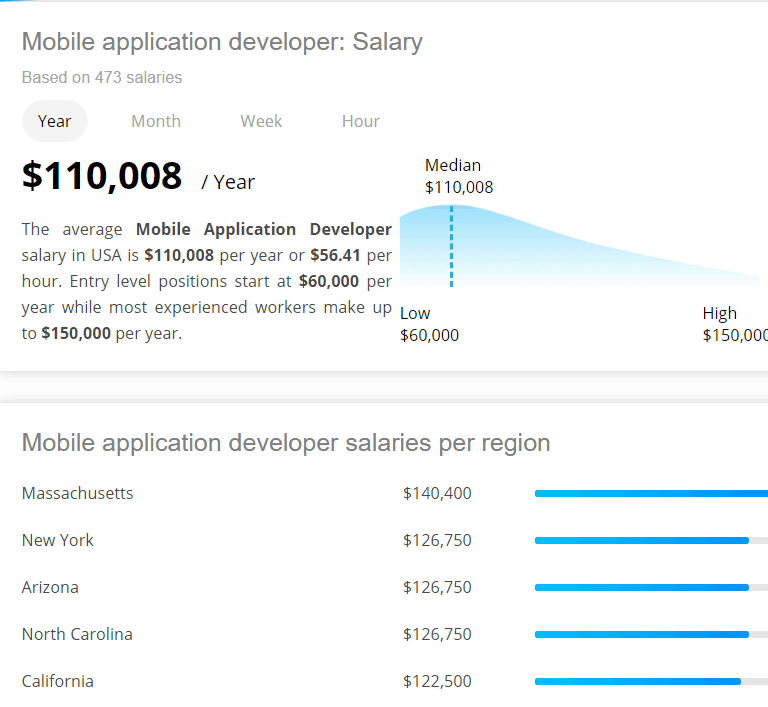 Android and iOS are the pillars of modern-day mobile applications and are only continuing to grow. They are the driving force of the modern world and what makes so many people attracted to their mobile phones. Nowadays, there is an app for everything. Starting from simple planning apps, weather forecast and reminders to fully functional social media apps and complex mobile games that are near as demanding as PC games.

Modern smartphones and a broader specter of functionalities have allowed for this career choice to grow more than ever and here’s what it requires. The mobile app developer is in charge of developing an Android and iOS application. You can specialize in Android development, you can specialize in iPhone development, or you can be equally proficient at both – the sky is the limit. Your target audience is the satisfied users from around the world, so your job is to architect functional, smooth and useful apps.

This position comes with various requirements. Primarily, there is a need to have amazing networking skills and know-how to set a proper architecture for a program. You must be well-versed in languages suitable for app development and application development environments such as Android Studio, Xamarin, XCode and others.

You need to learn languages like Java, Swift, C#, Kotlin and their variations to lead to higher proficiency. Lastly, you should be familiar with application migration and be able to build native and hybrid mobile apps. 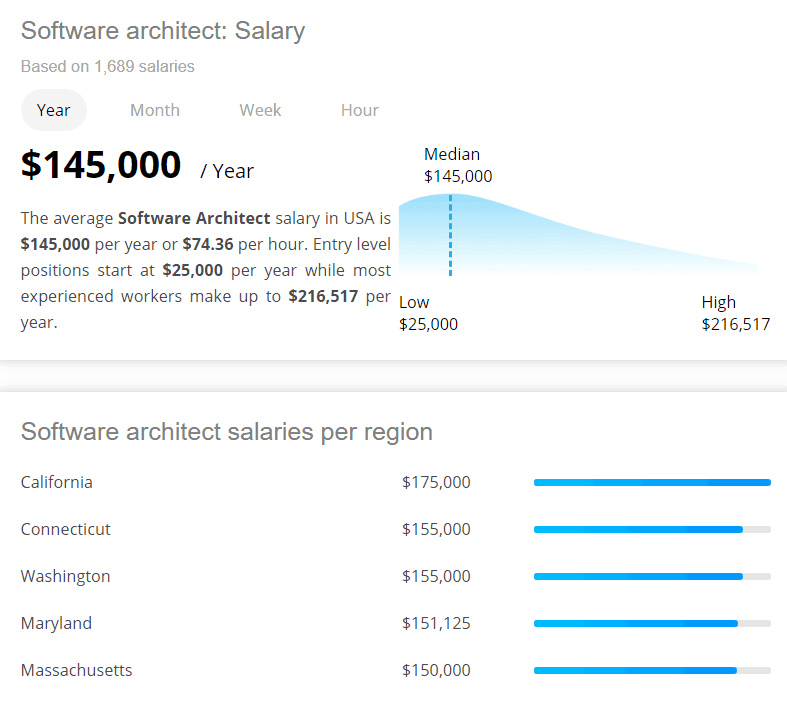 A software architect is in the dead race as the highest paying computer science jobs. It helps make an architecture of an application that will be used corporately in the future. They design new approaches and methods in developing software solutions. Software architects build a pattern that developers will later turn into the final product.

This job comes with a lot of requirements. Being a software architect also means being well versed with all types of development methodologies and approaches. They need to understand the fundamentals of computer architecture and how to utilize assets to design an effective app. Software architects need to have the development knowledge too, such as front-end development, back-end development, visual aspects of apps, middleware, how different interfaces work and other crucial app elements.

Software architects should also be able to find the drawbacks and benefits in each design and point out what can be done to make an already-existing design better. 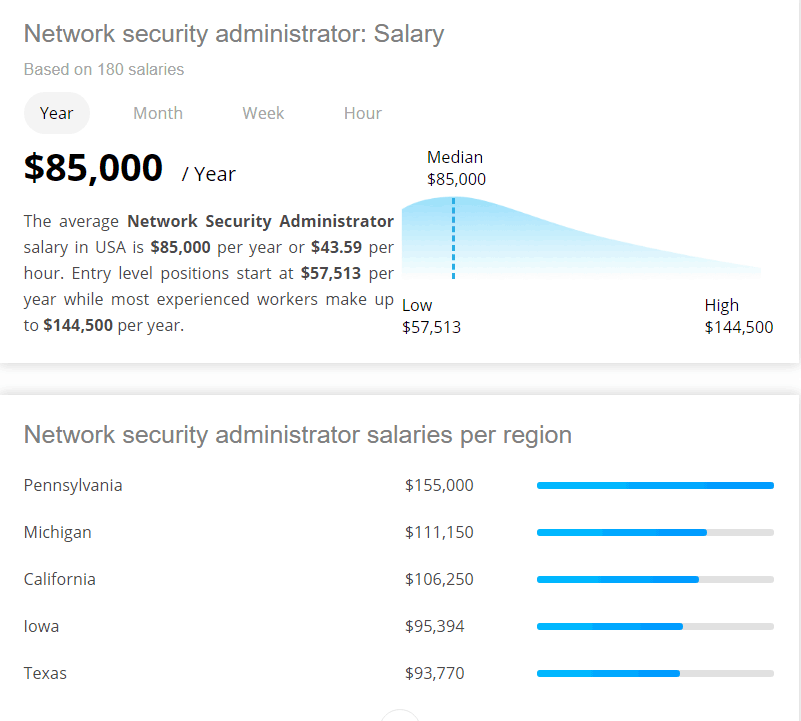 It’s a challenging position because the person needs to have expertise and experience using various technologies to ensure that no one is spying on the network, that the data is encrypted while transferring and that the systems in the network don’t get compromised.

Requirements include having in-depth knowledge from computer networks and architecture. That they are sharp-minded and can make decisions rapidly. They should be efficient in patching up the potential security flaws and know everything about the common security vulnerabilities. Companies require that a network security administrator has a certification that enables him to do the job.

Ethical Hackers are often called whitehats, their job includes hacking and breaching networks and systems to find frauds, scams and other types of illegal activities. What sets them from the average hacker is that they have the government-issued permission to do so. All people interested in computer security and digital forensics dream about becoming ethical hackers, hence it’s one of the highest paying computer science jobs.

Ethical hackers should have advanced knowledge from computer networking, architecture, and data administration. They should be able to make fast decisions and recognize vulnerability in the sea of data traveling through a network. They should use both conventional and unconventional tools to discover fraud. Lastly, they should be knowledgeable about different computer malware.

The final choice of picking the right career path is up to the individual candidate. All job positions listed below come with their own perks like experience, bonuses, and money. However, they also come with a lot of challenges and require different profiles of expertise to do them. There is no doubt that in the future, even more jobs in computer science and software engineering are going to emerge.